On June 7 and 8, 2014, LAC marked its centennial with a series of celebratory events for members and friends.  The festivities began on a warm and clear Saturday evening with a catered cocktail reception under a tent set up on Forest Park Avenue – renamed by Larchmont Mayor Anne McAdrews for the weekend as “Emily Lindsley Way”.  The David Brandom Trio provided jazz accompaniment to a wonderful start to the weekend events. 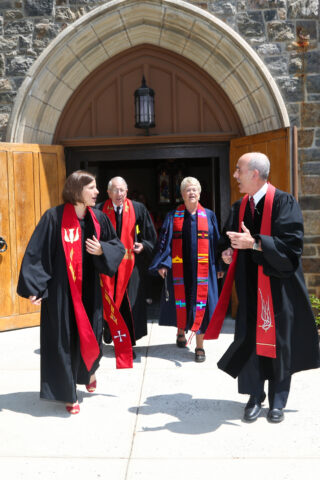 The Pentecost service included two glorious anthems, both of which were receiving their world premiere performances.   The chancel choir, the children’s’ choir, and the Larchmont Symphonia joined in presenting “We Believe in God,” which our Director of Music Ministry, Douglas Kostner (lyrics by Fanny Crosby), composed specifically for the Centennial Celebration.  The choir also sang “Live in Love” – a composition written in English, Xhosa, and Zulu – by Dorothy Papadakos, who had enlivened our centennial celebration in February with her improvised organ accompaniment of three Charlie Chaplin movies.  Led by the pastors, the congregation and choirs exited the sanctuary at the end of the service singing “We Are Marching in the Light of God” and proceeded to the outdoor tent for the centennial luncheon. 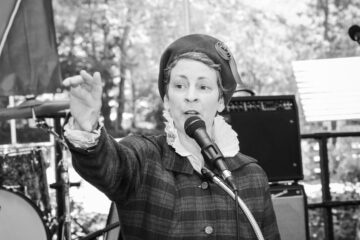 Among the highlights of the celebration lunch was the appearance of the founder of LAC, Emily Lindsley.  Looking remarkably good notwithstanding the fact that she had died in 1944, Ms. Lindsley (ably impersonated in the photo by Rebecca Shroyer) told the congregation about the founding of the church and its official beginning on June 28, 1914.  In response to questions by Rev. Crawford, she spoke about the groundbreaking for the church building a few years later, when she thrust the shovel into the ground and hit a rock.  Without missing a beat, she proclaimed, “You see, our church is founded on solid rock – our foundation in faith is strong.”  Not to be outmatched with a quip, Rev. Crawford commented to the congregation that our celebration was being held on a beautiful day, but that he couldn’t take any credit for the weather – as he explained, “I’m in sales, not management.” 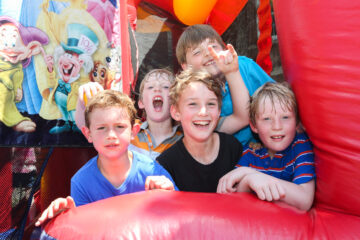 The celebration continued with children playing in the bouncy castle set up next to the tent and the music of Sway, a rock band that includes LAC member Ted Utz and which was joined for the day by LAC’s Spencer Robinson on bass and David Brandom on sax, and several chancel choir members and friends singing backup as the “Swayettes”.  Centennial Co-Chair Thea Beaver, ably assisted by her daughter and son-in-law Alyssa and Dan Gomez, served as quizmaster in a game that tested our knowledge of what life was like in 1914.  (Did you know that Emily Lindsley might have been using Brillo pads even before LAC was founded?)

We were delighted to see so many current and former LAC members join us for the celebration, including former Music Minister Judie Brown and former Church Visitor Stacie Heep.  More pictures of the centennial celebration can be found here. 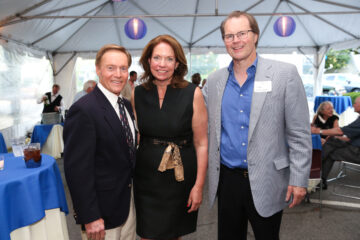 Many thanks to all who helped make the Centennial Celebration so memorable – a full list can be found here.  Special thanks to Centennial Co-Chairs Dan Walden, John Farris, and Thea Beaver, and to our pastors Rev. Bill Crawford and Rev. Julie Emery, for their hard work in helping to make our year-long centennial celebration a reality.