A Brief History of the Chancel Organs

The sanctuary of the Larchmont Avenue Church was originally designed to house a pipe organ in two chambers on opposite sides of the chancel. In 1930, an instrument made by the Aeolian Organ Company was installed and dedicated.  This instrument had three manuals and 34 ranks, and it provided good service until around 1968, when major repairs were needed to make it entirely playable. Since these repairs would have been costly, a committee was formed to look into options.

In 1972, the decision was made to replace the Aeolian with an electronic organ built by the Allen Organ Company. This was one of the first digital computer models, an instrument on the cutting edge of its time. Designed to imitate the sounds of pipes, this organ consisted of a traditional console but had speakers housed in the original pipe chambers and on the rear wall of the Sanctuary. Upon the end of the useful life of this instrument after nearly 30 years, a decision was once again required about what to do:  to repair or replace the Allen.

Again, a committee was formed and a long process of discernment brought about the decision to once again bring a pipe organ to the church. In 2001, the Sanctuary and Chancel were remodeled to improve the acoustics, and James Konzelman was contracted to build a new pipe organ in the chambers above the Chancel. 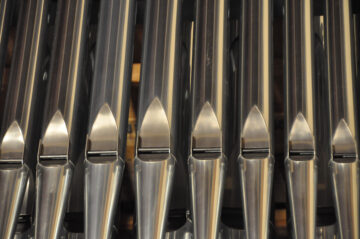 The new chancel organ, designed and built by James Konzelman, was dedicated in November 2008.  As originally designed, the new organ included 49 ranks and nearly 3,000 pipes operated from a four-manual console equipped with the latest digital system for controlling the combination action.  This system provides the organist with a wide variety of ways to manage the many possible sound combinations available on such a large instrument. Also, the chambers and console allow for the possible future installation of additional ranks, to allow adding more colors to an already complete and impressive instrument. 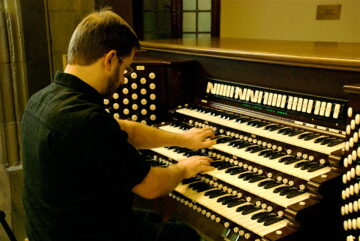 Indeed, in 2012 an Erzähler and Erzähler Celeste were added, bringing the organ to a total of 51 ranks.  This remarkable instrument has been used to play a wide variety of sacred and secular music, ranging from Renaissance pieces to 21st-century composers and improvised accompaniment to Charlie Chaplin silent films.

For a list of those who generously gave to create this beautiful instrument, and a list of the members of the Organ Implementation Committee, click here.