Our History from 1914 to the Present 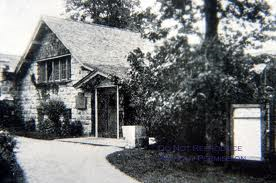 On May 17, 1914, 40 people met at the Larchmont home of Emily Lindsley, daughter of a Presbyterian minister, to form the congregation which would become the Larchmont Avenue Church.

They were united by faith and their desire to establish “a church in the Reformed tradition” in Larchmont. Within a few months, they had formed a Sunday School and formally organized under the Presbytery of Westchester. Services were first held in artist Helena Flint’s studio carriage house, but the rapidly growing congregation soon needed a permanent home. Land was purchased at the corner of Larchmont and Forest Park Avenues, and by December 1915 the “basement church,” now the Carhart Room, was completed at a cost of approximately $6,000. Rev. Charles Carhart became LAC’s first pastor. By 1919, the church was already outgrowing the basement space; some Sunday School classes were forced to meet in the furnace room! A building fund was established for a permanent church. Activities were many, carried out by the Women’s Society, Men’s Group, Mission Society and others. Up to one quarter of the church’s budget was devoted to benevolences.

In 1922, Rev. Dr. Robert M. Russell was installed as LAC’s second pastor, and in 1925 the Parish House or Church House (now Russell Hall, the Lindsley Room and church offices), was dedicated. LAC aimed to be “a 7-day church for a 7-day need,” and many community organizations used the new space, among them the Women’s Club, the Garden Club, the Men’s Club, the Society of Friends and the Masons. 1926 saw a membership of 400, with 450 children enrolled in the Sunday School.

In 1929, the collapse of the stock market occurred as LAC embarked on its ambitious campaign to build the Sanctuary. Inspired by the following song (to the tune of “Take Me Out to the Ballgame”) the congregation succeeded in raising funds, and the present Sanctuary was dedicated on November 2, 1930. 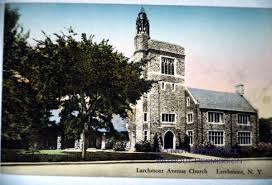 Take us out of the basement, Take us up in the air. Give us some cushions to sit upon, So we can sleep while the sermon is on. Let us root, root, root for an organ, And a roof that won’t leak in the rain. So let’s give, give, give till it hurts, For the church campaign.

In 1931, the Rose Window, the first of LAC’s beautiful stained glass windows, was installed; however the national financial crisis was deepening and ultimately called for a 33% reduction of LAC’s 1932 budget. Rev. Russell took a pay cut and members donated their silver, gold and jewelry help fill the coffers.

Despite these efforts, LAC was at risk of foreclosure by 1934. Rev. Russell offered to take another reduction in salary, but his offer was refused by the Trustees, who managed to renegotiate the church’s debt. Despite these troubles, LAC continued all its functions, even benevolences, and Dr. Russell founded the Larchmont Organization for Unemployment Relief, later the Larchmont Aid Society. Better times lay ahead; by 1938 the church had cleared all its debt except the mortgage and membership had grown to 1,207. The Sunday School was the largest Presbyterian Sunday School in Westchester.

Having guided the church through a difficult period, Rev. Dr. Russell resigned for health reasons in late 1939. In January 1940, Rev. Floyd McGuire became the third pastor of the Larchmont Avenue Church. Religious involvement in the United States increased as the nation entered World War II, and so did membership, attendance and pledges at LAC.

From 1941 – 1944, the Red Cross used LAC’s Church House for its war work. The Couples Club, Doublets, 4th Friday Fellowship and Men’s Association were all formed to strengthen fellowship among church members. Sunday School enrollment continued to increase, and by 1942 two sessions were needed to accommodate the students.

On October 18, 1944, Emily Lindsley died, having seen the church grow from 51 members to approximately 1,500.The rapid growth of LAC created opportunities and challenges in the period after the War. Rev. Herbert Landes became the first full-time assistant minister in 1946.

In 1947, the great West Window, the “Christ of the Resurrection” window, was installed as a memorial to the men and women of LAC who served in the Armed Forces in World War II.

By 1950, Sunday School enrollment was over 700, and the need for new space was critical. Plans for a new Church School building were begun, and in 1953 the new building, including the Library, was dedicated. LAC membership rose to its all-time high of over 2,000 in the mid-50s and the church sponsored a wide variety of activities and programs for all ages, including notable speakers and member-written musical revues. In 1958 the Endowment Fund was established for future capital needs. The home next to the Church (181 Larchmont Avenue) was purchased in 1962 as a manse for the senior pastor.

During the 1960s LAC was not untouched by the issues affecting the nation and the world.  High school seniors began studying the practice of non-violence as a means of social change. Rev. McGuire preached on the 1963 assassination of President John F. Kennedy and presided over LAC’s 50th Anniversary celebration in 1964. The all-day anniversary event included speakers including the pastor of the first church to integrate in Ohio, and someone  who had just returned from civil rights marches in Mississippi. In conjunction with the celebration, Alice Holby wrote a history of the Larchmont Avenue Church.

After serving for 24 years and seeing the church through an extraordinary period of growth, Rev. Floyd McGuire retired in 1964. He was succeeded in 1965 by Rev. James Emerson, as fourth pastor. In 1966 “The Prompter”was inaugurated — a regular newsletter that included the worship bulletin of the Larchmont Avenue Church.

In 1970, Rev. Emerson was succeeded by Rev. Calvin DeVries. It is worthy of note that two of Rev. DeVries daughters were later ordained to the Presbyterian ministry: Rev. Janet DeVries and Rev. Nancy DeVries.  Rev. Richard Martin became LAC’s sixth pastor from 1978-1997.

The Larchmont Avenue Church Nursery School (now the Preschool) was founded in 1974, utilizing the Church School classrooms during weekdays. It began with 12 four-year-olds and now serves over 150 children aged two to four from the church and the community. The original director Joyce Guimaraes retired in 2019 and was succeeded by Alexandra Belluzzi. 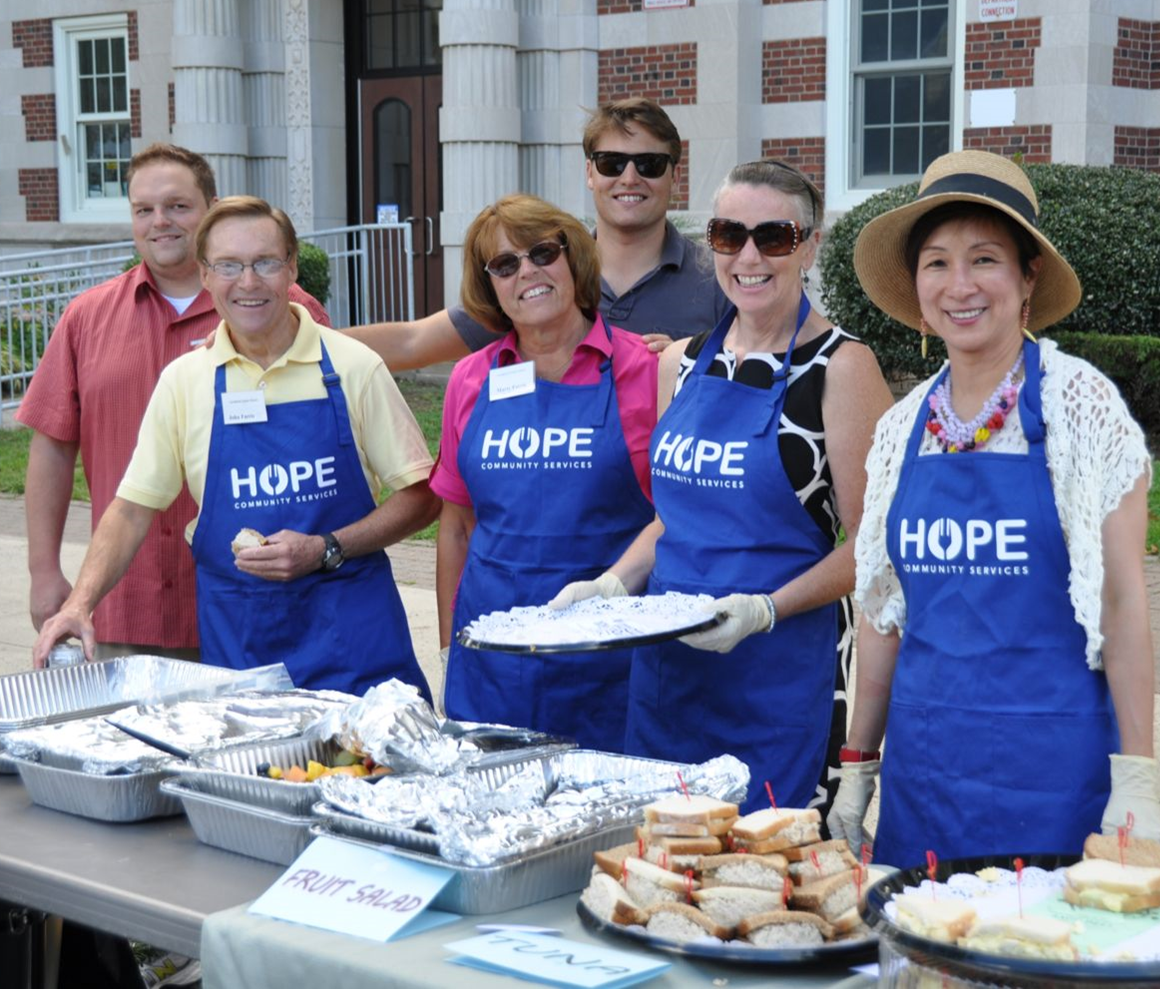 The 1970s and 1980s were challenging times for churches, as society became more secular and life and work more demanding for congregants. Forward-looking church leaders began a fundraising campaign during this period to add to LAC’s Endowment Fund. When it was established in 1958 the Endowment was made up largely of unrestricted bequests; the 1980s drive increased the Endowment substantially and reaffirmed its purpose to support major capital projects. The Endowment continued to grow through market appreciation, bequests and additional gifts. Generous members, many of whom are still active today, have exhibited their faith in the future of LAC by contributing to the Endowment. Today we are very fortunate that income from the Endowment provides critical financial support for our beautiful but aging church buildings.

In the decades of the ’70s and ’80s LAC saw a gradual decline in membership, but new initiatives kept the church a vital part of many people’s lives. Fellowship and outreach during the 1980s was championed by the Candlelighters, a group of young married couples, and included Steak Under the Stars, LAC’s first annual Block Party. Tot Drop, a cooperative morning babysitting group, began in 1983. LAC’s 75th Anniversary in 1989 was celebrated with events and prayer. Members began an ongoing annual campaign to contribute to Oxfam America; and LAC began its support of HOPE Community Services, delivering hot meals to homeless families at the Larchmont Motel.  The Memorial Garden, where the ashes of LAC members rest, was created in 1982 and beautified in 2018.

In the 1990s, LAC membership stabilized in the low 800s. The Midnight Run began in 1992, in cooperation with Larchmont Temple, bringing meals and clothing to the homeless in New York City. The congregation designated 1994 a “Year of Outreach” for the community. Throughout the decade, the Festival Choir presented annual concerts of great choral works with orchestra; the music program was aided by the donation of a Steinway concert grand piano for the sanctuary and the establishment of a hand bell choir.

When Rev. Martin resigned in 1997, Rev. Lincoln Richardson served as interim pastor from 1998 to 1999. On October 17, 1999 Rev. William P. Crawford was installed as the seventh senior pastor of the Larchmont Avenue Church.

At the turn of the millennium, LAC was the third largest church in the Hudson River Presbytery, though membership had dipped to 764. It was during this period that LAC launched its first web site and made “The Prompter” a monthly newsletter separate from the worship bulletin. At the end of 2000, Session authorized a highly successful community campaign to replace LAC’s failing electronic organ. Worship moved to Russell Hall  briefly as the Sanctuary underwent construction to prepare for the organ installation, make accessibility modifications, and improve lighting and acoustics.

Installation of the magnificent Konzelman pipe organ, with 2,916 pipes and 51 ranks, was finally completed and a service of dedication was held on November 23, 2008.

Louise Moore Williams was hired as Director of Christian Education in 2003 and initiated the practice of having children sit with their families for the first part of worship.  The sacrament of Communion, celebrated on the first Sunday of the month,  became a special day when Sunday School children went to their classrooms first and returned to the sanctuary in time to take Communion with their families.

The first of the pop 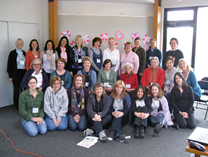 ular annual Women’s Retreats took place in 2000. At the end of December 2001, a group of 20 traveled to Nicaragua on the first LAC Mission Trip, which became an important LAC outreach to the world. 2006 was “a time of discernment” at LAC, as Rev. Crawford and church members worked to resolve questions about the direction of the church going forward, aided by a report from the Alban Institute.

In preparation for the centennial in 2014, many areas of the church were modernized, including the women’s and men’s rooms, windows in the Christian Education Building and air conditioning in Russell Hall. Communications were upgraded with a redesigned website, an LAC Facebook page, weekly online Church Notes and blogs from Mission travelers. 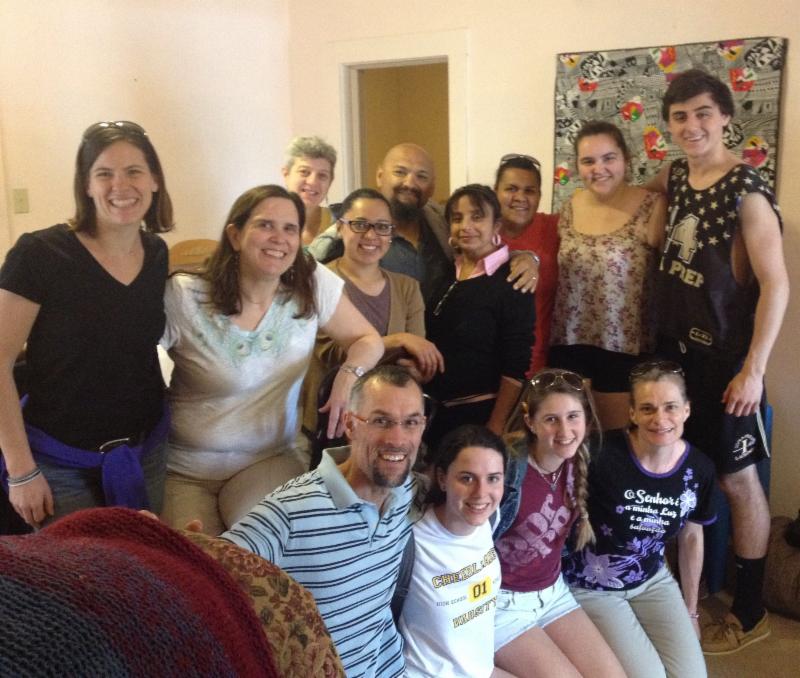 A strong emphasis on church community was nurtured throughout the Centennial. A directory of members was published in glossy color with photographs and contact information for members. The “Raise Your Hand” initiative aimed for 2,014 hours of community service performed by LAC members. The stewardship campaign, “What’s Your Story?” emphasized the personal faith journeys of contributors.

Recent News
Rev. Bill Crawford retired in summer of 2018 after 20 years of service. The Rev. Dr. Ellen Clark Clemot is currently serving as Interim Senior Pastor while the process of calling a permanent pastor is underway.  As part of this transitional period a Mission Study team was assembled to listen to members regarding their priorities as LAC prepares for the next 100 years.  The Mission Study Report can be read here. The Mission Study Report guided the creation of the Ministry Information Form, a document describing the priorities of the Congregation and the qualities desired of the next Senior Pastor. The discernment period is underway between the Pastor Nominating Committee, the Session and staff at the Presbytery.  With God’s grace, a new Senior Pastor will join LAC in 2021.

Urgent capital projects were undertaken in 2019-2020, including the restoration of the church spire, the redesign and furnishing of the Carhart Room and community kitchen, and renovation of the manse to meet contemporary standards.

Membership in the Larchmont Avenue Church is once again increasing, especially among families with children. The Session has created a Welcoming Committee that builds on the work of a temporary Coordinator for Congregational Life (2015-2018).  The committee is creating a comprehensive program to attract new members, improve LAC’s visibility as a Community Welcome to All, and engage a new generation of members in leadership at LAC. 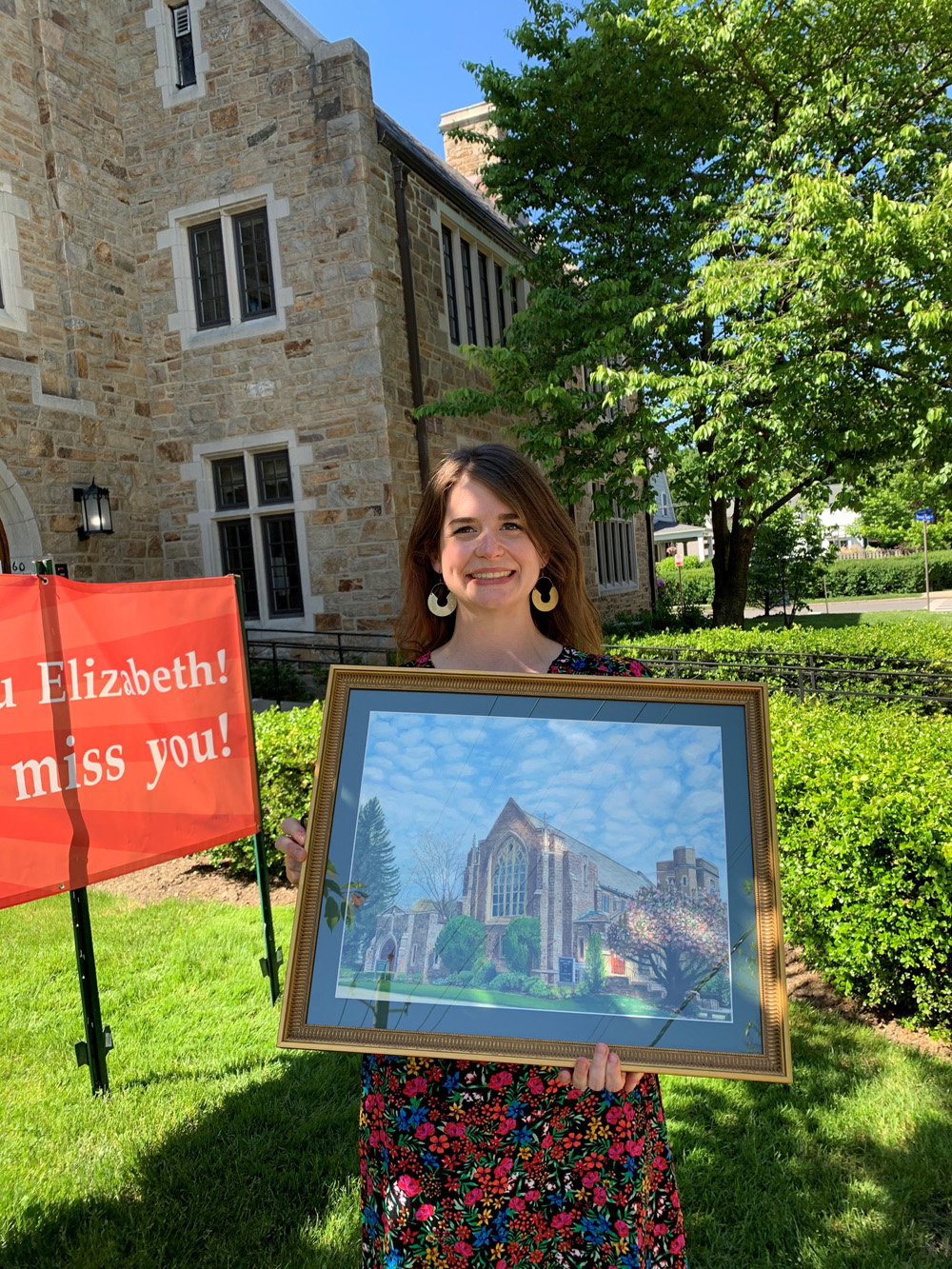 In May the congregation hosted a socially distanced car parade to send off Rev. Elizabeth Smith-Bartlett, our much-beloved Associate Pastor. Elizabeth was given blessings and lots of virtual hugs as she set off to Richmond, VA to pursue a call to hospital chaplaincy and patient counseling.